Almost 20 years ago, I had a position in Competitive Intelligence at a telecom company. Great brand, competitive, focused on so many of the right things. We got weekly reports, saw our progress; knew our targets and; how each of the 4500 employees  was contributing.

It was a Monday morning. I parked at work, walked into the building and crossed paths with Sergei. We greeted each other with “Good morning, how are you?”s. Now Sergei is an interesting man. A PhD in Engineering from eastern Europe, a quiet, gentle, humble professional. We knew each other from a previous employer too.

A few minutes later, I am at my computer, reading the Monday Morning Stats report. It showed sales updates for the week, cumulative paying subscribers (including employees) by region etc. I saw the total subscriber number for our province and thought of Sergei … who managed our switch. I called his extension:

K:  “Sergei, how much work is involved in pulling a report from the switch on active phone numbers?”

K: “I would like to know exactly now many cell phones lines are active on our switch.”

The report was in my inbox that very shortly after.

The results were SHOCKING.

The national report showed our paying subscriber count was 25% less than the active phone on the switch. I interpreted this as leaving 25% of revenue on the table. In other words, 25% of people using or phones were not paying to use our network. The revenue gap would be staggering.

At that point my plan was to:

One way you can use big data to get big results.

If you have any questions, please feel free to email with your question. I would love to hear from you.

Not that long ago, you might have done one of two things:

The problem with that strategy now is none of your purchasers want to be called like this.

They’re too busy to take calls from sales reps who won’t give them any useful information over the phone. (Because good sales reps have been trained to find out what your pain points are instead of talking about pricing.)

So if you are having a hard time getting to your prospects, the purchasing game changed and you are well advised to change your marketing game to fit 2018.

Today’s purchaser knows what they need for most of the year ahead. If they need your widget delivered in 23 days, assuming they don’t already know you, they will start looking online for “widgets”. They might start to analyse who makes widgets, features of each vendor’s widgets and price.

This is where you need:

Some companies get the first one done and then call it a day. They don’t think about the buyer’s journey. Hubspot published a report stating ⅔ of North American businesses felt they had significant room to improve their content marketing.

If you are in that category and are interested in finding out how to improve your sales and marketing operations, please email me here.

So much has changed in marketing over the last decade and so much of traditional selling has not.

Sales people are invaluable to your revenue generation targets. The skills they have to possess for their line of work include:

Not everyone can do this type of work. So if you want to best allocate your resources, enable sales people to build and nurture relationships. Let your marketing efforts deliver them quality leads.

The idea that the sales team could focus less on finding leads and more on building relationships means you are maximizing your team’s strong suits. I have never met a sales person who didn’t welcome a lead being hand delivered.

Stay tuned for more content on Lead Generation and how to best support your Sales team.

This is the start of a blog for business people. You will read real stories of my experiences in business. Some good, some shockingly bad and everything in between. You will get a sense of my direct communication style, my lack of patience for talking in circles and my penchant for numbers, KPIs, metrics and more.

Warning: it will be critical. Praise will be given when due. Names will be falsified to protect those in the line of fire.

Open to questions: send me a brief overview of your business along with any questions you may have.

Join me on this magical ride we call entrepreneurship. 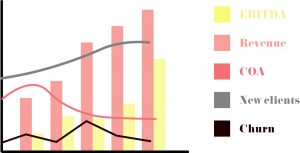 It may sound like common sense but you would be shocked at the number of businesses I encounter who basically know if their business is doing well at the end of the year when they meet their accountant.

There is a better way:  and it’s called “Data”.

You don’t have to be a large company to collect data.  As a shop owner, I captured traffic, conversion rate and gross sales number every single day. On a monthly basis, I had a big data software run that would give me inventory levels, turn, profitability, GMROI, mark downs and so much more in 12 different categories of inventory.

As a call centre manager, I looked at Average Speed to Answer every 5 minutes. I checked abandonment, average handle time, agents who logged out of the phone system and weren’t on an official break. Weekly, I rolled up these numbers and added cancellations to the report so I could get a sense of service quality.

If you measure activity properly, you can identify opportunities for improvement. You can communicate with your team and show them priorities. Numbers, data, reports, they align a team very effectively.

If you need better insight into your team’s operations and you would like to run by some metrics, please feel free to email me anytime.

I received a request from a prospective client: ‘we want to do some market research.’ After a little bit of probing, I found out the organization had:

– been in business for > 5 years
– several rounds of investment
– > 50 people on staff
– several product sku’s, two generations of product
– major distribution partners in retail
– a very large product development team
– no sales or marketing team
– no idea what their sales were

This organization would definitely fit into the “Product Development” category. The biggest tell is they had zero dedicated sales and marketing staff.

My top three recommendations:
1. start weekly reporting on the sales numbers by channel partner to see who is selling through and who needs more channel support
2. hire a retail sales channel specialist to get feedback from the channel and manage the marketing through each retailer
3. get an inventory report to see how much 1st generation product needs to liquidated (raises cash and clears space for the current iteration)

In addition, I had some grassroots tactics for Public Relations and Social Media that I shared with them.

If you are a Product Development organization that needs to grow Sales and Marketing, I am always available for a discussion.